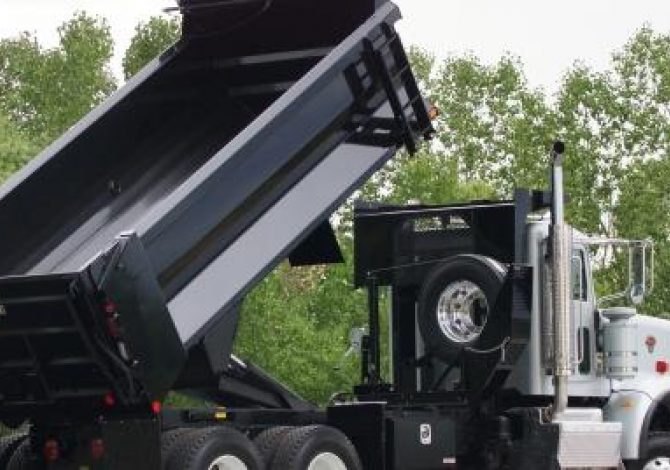 DENVER – Dump trucks are one of the less glamorous members of the working truck family, but try to imagine what it would have been like boring the Eisenhower Tunnel if all that rock had to be hauled away in wheelbarrows.

While they may not be the supermodels of the construction business, there’s not a road builder, housing developer, farmer or landscaper who doesn’t know the value that dump trucks bring to a project. And even if they’re not all that sexy, there’s a company in Lake Crystal, Minnesota that takes those Plain Janes to a level that’s turned a lot of heads.

Starting in 1969 as a mom-and-pop machine shop that made truck hoists, Crysteel Manufacturing, Inc.(pronounced KRIS-teel) has become one of the world’s leading producers of truck hoists and platform and dump bodies. Known for innovation and dedication to quality, Crysteel truck bodies are in use by government agencies, private contractors, landscapers, and farmers around the globe. Their military dump bodies and hoists are an integral part of our defense supply and logistics chain, too. They provide the payload and durability to support any mission they are called on to perform.

Today Crysteel has over 300 distributors worldwide, including at least one in each of the 50 US states. O.J. Watson Equipment in Denver and Greeley is proud to be one of the largest.

So what could possibly be innovative about a dump truck, let alone sexy? Just ask the people who use them every day. That’s what the engineers and designers at Crysteel and O.J. Watson do. And they listen.

Ever since Crysteel added dump bodies to their line in 1980, the focus has been on giving customers what they need. The Triple Tipper, a 3-way dump body, introduced versatility theretofore unknown in the industry and was the hit of the 1986 NTEA convention. Building on the success of the ParadoxBox, the Paradox Rox Box was introduced in 1996 and led to Crysteel being awarded a $7 million contract in partnership with Freightliner Corp. to produce dump bodies for the US government.

2003 saw the debut of The Deuce, a body able to dump from both the rear and side and it quickly became an industry sensation. The following year, Crysteel’s Super Dump, a seven-axle monster, hit the market as part of a partnership with SilentDrive.

It allows users to meter materials more accurately by raising the bed opening with a pneumatic lift rather than simply swinging open. And dumping bulky materials is easier because the High ‘n Slide can lift the gate well above the sides of the dump body, letting even the largest loads slide out without interference from the tailgate.

Crysteel dump bodies are even joining the “green” movement. Their line of E-Tipper dump bodies combines great looks with strength and value in lightweight aluminum and stainless construction to lighten their weight, saving in operating expense while maintaining the performance customers have come to rely on from Crysteel.

These light dump bodies are tailored to a number of uses. The Stainless Steel E-Tipper gives protection against corrosion from harsh environments and corrosive materials while maintaining strength and durability.

Weighing in at up to 50% less than traditional carbon steel bodies, the Aluminum E-Tipper saves on fuel, tire, and brake costs without sacrificing performance. And the Deuce E-Tipper brings the versatility of both rear- and side-dumping to a lightweight dump body.

Landscapers can get the benefits of an E-Tipper especially designed for them. It has a removable upper tailgate that doubles as a ramp, a stowaway ladder, and unibody design for easy clean-out.

Because each municipality, contractor, or individual user has its own requirements, O.J. Watson’s staff meet with each customer to determine precisely what those needs are. They then design the truck body to meet them. Once the design is approved, it’s sent to Crysteel where the body is built and delivered to O.J. Watson’s Denver facility for mating with the vehicle that will carry it.

“Our goal is always to go beyond simply selling our customer a truck,” says Mark Eckrich, O.J. Watson senior vice president and member of the ownership family. “We create business solutions by matching the customer with the size and style of truck best suited to their needs.”

If that means finding a specialty manufacturer like Crysteel to work with on a custom design, that’s what they do. “We’re only as good as the last truck we made,” Eckrich adds, “and we keep that uppermost in mind on every project.”

O.J. Watson’s relationship with customers doesn’t end with the sale, either. “We build trucks to do a job, and that job continues long after the sale,” says Eckrich. “Service isn’t just a department to us, it’s a commitment. We stock spare parts and supplies for the trucks we sell to keep our customers up and running.”

O.J. Watson Equipment was founded in 1912 and is now entering its second century of meeting the needs of working Americans. It was launched in Wichita, Kan. by Oscar J. Watson, an entrepreneur whose friends and business associates included American icons Henry Ford, Clyde Cessna, Walter Chrysler, William Coleman, John Willys, and David Sarnoff. He launched his business by taking early Ford and Willys passengers cars and pickups and turning them into purpose-built vehicles, which remains the core competency of the firm to this day. O.J. Watson expanded to Denver in 1974 and in 1988 the company was purchased by Richard Eckrich, who has carried on the tradition of family ownership. The firm also maintains a full-service operation in Greeley, Colorado.

In addition to Dump Trucks, O.J. Watson builds Service Body Trucks, Crane Trucks and Mechanic Trucks, Platform Trucks, Aerial Bucket Trucks, Hook Lifts, and a wide variety of Snow & Ice Control equipment. O.J. Watson trucks and equipment are on the job throughout the Rocky Mountain West for private businesses, municipal and city operations, state workers, airports, and federal work crews performing everything from the smallest tasks to heavy-duty demands in a full range of industries. For complete information call 303-295-2885 or 800-332-2124.